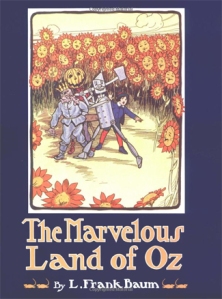 I continue my Oz reading with this second installment of Baum’s fantastical world.  I know that I’ll read at least one more if not two in the series.

Plot:  Let’s get one thing out of the way: Dorothy is not in this one.  Our story opens in the Country of the Gillikins, the northern land of Oz, and follows a boy name Tip as he escapes from his cruel master, the witch Mombi.  Before leaving, Tip steals some magic powder which he uses to animate a pumpkinhead man that he has made.   Their plan is to travel to the Emerald City to meet the Scarecrow, who is now the ruler of that place.  Along the way, they animate a saw horse and ride him to the City.

They meet the scarecrow who unfortunately is not much help as his city is quickly overthrown by an army of girls with knitting needles.  They all escape to the land of the Winkies where they meet the Tin Woodsman who rules there.  They return to the Emerald City but are quickly surrounded by the girl army, escaping by creating a flying machine out of various items including the head of a gump.  Eventually they make it to the south country where they meet with Glinda the Good who accompanies them take back the Emerald City from both the girl army and Mombi.  There is an excellent plot twist at the end that I will not spoil for you.

Personal Reaction:  I felt that this book was different from the first in that L. Frank Baum seemed more sure of the tone that he wanted to strike.  In the Wizard of Oz, the story often overwhelmed a great deal of character development (“and then this happened…and then this happened…”).  But Baum allows The Marvelous Land to breathe a bit more and lets the characters have extended conversations that illuminate their personalities.  One dialogue that I found enjoyable was early on in the book when the Scarecrow and Jack Pumpkinhead are first meeting.  They talk themselves into the idea that, because they are from different lands of Oz, then they must need an interpreter to understand each other.  Of course, they are speaking the same language the entire time.

I also appreciated how each character was proud in their own way of their uniqueness, but also inclined towards sensitivity on this matter.  The Tin Woodsman, for example, has himself nickel plated and is careful to avoid scratches to preserve his lustre.  Jack Pumpkinhead is careful not to damage his head and is constantly worried about spoiling.  The Sawhorse is embarrassed when one of his legs is damaged and must be switched out with another piece of wood.  Baum’s characters wear their weirdness on the outside, but just like people, are inclined to be self conscious about it.

Taken all together, I believe that this book holds up (a bit of sexism concerning the girl army notwithstanding) over a hundred years later.  I can cheerfully recommend The Marvelous Land of Oz to 7 year olds and up.