There’s a new boy in Frannie’s class. He’s different.  For one thing, he’s white, which is a big deal on this side of town.  The other noticeable difference is that he has long hair down to his shoulders.  The kids in the class dub him Jesus Boy.

Frannie is interested in the new boy, but she has plenty to think about at home.  Momma is pregnant again and Frannie is praying that this time they don’t lose the baby.  Her brother Sean is deaf, but has begun to discover the world despite his disability.

The bully at school, Trevor, doesn’t help Frannie’s to calm her mind either.  He’s constantly trying to stir up trouble, including provoking Jesus Boy.  All of these anxieties cause Frannie to ruminate continuously on the nature of relationships, God and hope.

This was a Newberry Honor book in 2008.  To me, this book seemed a bit meandering, as if Jaqueline Woodson wasn’t quite sure what type of book she wanted.  The writing is strong, but the storyline could use a bit more pop to grab younger readers.  Recommend to ages 10 to 13.

Jerome Foxworthy is a black high school student growing up in the sixties in Wilmington, North Carolina. Jerome is smart, athletic and lucky enough to have a strong family. Basketball is Jerome’s passion and every evening he spends out on a basketball court on the edge of town practicing his moves.
When Jerome is tasked to integrate an all white high school, he is pressed for friends. Enter Bix Rivers, a complicated, troubled, but extraordinarily gifted baseball player. With trouble at home eating at him, Bix seems destined to lead a solitary life.
One evening finds both boys at the lone basketball court. There, under the light of an old railroad lantern, a friendship will grow that will test the limits of both of them.
This is one of the best YA sports books ever written. Even if you don’t love sports, you may love this book. Tender and unforgettable, Bruce Brooks’s novel will touch you.

It’s the summer of ’61 and Louis May has a lot of new things in his life.  His parents have recently divorced and he and his dad have moved in with his stepmom and stepbrother in White Plains, New York.  It’s an uncomfortable arrangement and Louis constantly feels that he’s getting overlooked.  Baseball is the center of Louis’s life and things start to look up when he is hired on as a batboy at Yankee Stadium.

It is the summer of the homerun race between Maris and Mantle, and Louis is right in the thick of it.  But being a batboy and rubbing elbows with famous ballplayers doesn’t make all of your problems go away at home, as Louis will learn quickly.

I enjoyed this book, but, if you’re not a baseball fan, I would not recommend it.  The plot turns a little too easily on the unbelievable event of being hired as a batboy by the Yankees.  Even worse is a cameo by Bob Dylan later in the book.  I recommend to baseball fans ages 9 to 11.

Mr. Collins has taught math at an urban middle school in Cleveland, Ohio for the past twenty years.  Frustrated with his students’ lack of interest in the subject matter, he offers them a challenge:  build the biggest tetrahedron structure in the world and make it into the record books.  For those who don’t know what a tetrahedron is (and I had no idea), it is a geometric solid with four faces, each of  which is an equilateral triangle.  The structure that Mr. Collins’ math class intends to build will comprise 16, 384 individual tetrahedrons.

To achieve their goal, they agree to form a math club and meet after school each day to fold and glue the tetrahedrons.  Each student, however, has a life outside of school that presents challenges.  Sharice is on her 5th foster home and is a victim of neglect.  James Harris III lives with his older brother and his thuggish friends that threaten to destroy the tetrahedron.  Marcel works each afternoon at a bar-b-que joint owned by his father who cannot see the value of the math club.

The book is written from a first person point of view and each chapter is presented from a different character’s perspective.  Readers will find themselves emotionally invested in each character and hoping that each one of them overcomes their respective obstacles.

I loved All of the Above for its underlying message of hope and perseverance.  Shelley Pearsall seems to be saying that we all must build our communities with the people and materials that we have at hand.  I would recommend to ages 9 to 14.  Themes include math, poverty, urban schools, father-son relationships, inner city, community building

If you’re looking for a book to make you cry, this is it.  Eleven year old Sam has leukemia, so he stays home everyday with his teacher Ms. Willis and his friend Felix, who also has cancer.  Sam likes to list facts about himself, such as he has always wanted to go up a down elevator or take a ride on an airship.

With these lists, Sam seems to be able to hold his world together against his disease, but this stability is tested when Felix develops an infection and is rushed to the hospital.  He passes away a few days later and in the following weeks, Sam’s health also deteriorates.  Sam’s parents struggle to grant him some final wishes, including taking a ride on an airship.

The final pages are extraordinarily touching.  I’d recommend to ages 9 to 13.  Themes include perseverance in the face of death and family bonding in a time of trial. 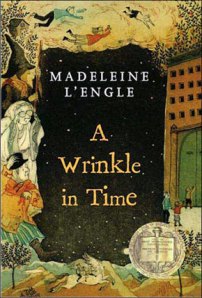 Beginning with those famous words “it was a dark and stormy night,” A Wrinkle in Time by Madeline L’engle remains as readable as when it was first published in 1962.  A Newberry Medal winner, it mixes science fiction, fantasy, philosophy and religion in an interstellar adventure that will appeal to both children and adults.

Plot:  Meg Murry’s father has been missing for over a year and it weighs heavily on her family.  She, her genius younger brother Charles Wallace, and friend Calvin O’keefe find themselves visited by three strange women.  Cloaked in rags and white robes, Mrs. Who, Mrs. Which and Mrs. Whatsit “tesser” the three children across the universe to a planet that is being consumed by a dark force.  Known only as IT, this power seeks to dominate societies into a collective conformity.  Meg and her companions must avoid the tempation of being sucked in by IT while rescuing Mr. Murry.

I love this book because it celebrates the triumph of love, creativity and intellectualism over the forces of darkness.  A wonderful read for children ages 8 to 13.