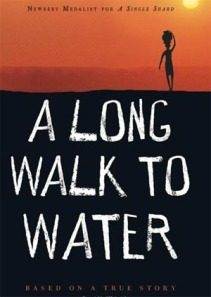 The Plot In Five Sentences Or Less:  Salva is a boy who  growning up in the south Sudan village of Loun-Ariik in 1980’s.  While attending school one day, his peaceful life is shattered by the tribal conflict tearing apart Sudan.  Fleeing his village as it is attacked, Salva joins a group of refugees heading east to a destination unknown to him.  Along the way, he luckily encounters his uncle, the only person he recognizes as well as possibly his  only surviving family member.  With his uncle and the rest of the refugees, Salva continues his trek towards a fate that will test him to the extreme and take him places he never thought he would go.

My Take:  Having read A Single Shard a few years ago, I was well acquainted with Park’s writing being characterized by a modest plainness that belies a deeper, quiet strength, or what one reviewer referred to as a “core moral purposefulness.”  A Long Walk To Water carried on in this tradition with its exploration of one of the most horrific situations in modern times: the war in the Sudan.   Genocide is not necessarily fertile ground on which to base juvenile fiction, but Park handles the subject deftly.  Through the character of Salva, she manages to depict the brutality in a way that children will understand but that also makes allowances for the sensitivity of young  minds.  Those looking for a thoughtful way to talk to young readers about conflict and the moral choice to turn suffering into social contribution could do worse than choosing this wonderful book.  Ages 10+

One Interesting Note About The Author:  According to her website, Linda Sue Park’s first piece of writing that was published was a haiku that was accepted by a children’s magazine when she was 9 years old:  In the green forest/  A sparkling, bright blue pond hides./  And animals drink.