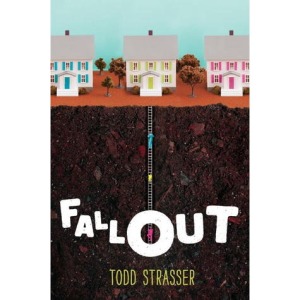 The Plot in Five Sentences or Less:  Recounts the experience of one middle American family during the nuclear standoff of 1963.  The plot alternates in time between the family preparing a nuclear fallout shelter and then actually using it during a nuclear strike.  9 people make it into the shelter and tensions run high as time passes.  The story is told from the point of view of a teenage boy whose father constructs the shelter.

My Take:  Fallout is enjoyable and also educates readers on the widespread fear during the early sixties of a nuclear strike.  Strasser does an excellent job of building up the anxiety and claustrophobia in the fallout shelter.  He also does not dodge the difficult topics of burgeoning teenage sexual feelings nor the bathroom issues involved with 9 people trapped in a room.  This cannot be considered strict historical fiction as there was never a nuclear strike on American soil during the 1960’s.

One Interesting Note About the Author:  Fallout is based on Strasser’s father constructing a bomb shelter in the family’s backyard in 1962.  Strasser revisits this in the author’s note at the end of the book.