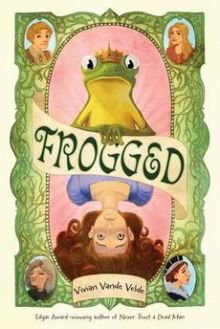 The story in no more than five sentences: Princess Imogene Eustacia Wellington meets a talking frog near a pond who claims that he is a prince who has been turned into a frog by a witch.  When Imogene kisses him, the spell reverses by turning her into a frog instead!  Imogene tracks down the witch who takes responsibility for the spell but refuses to help her.  A group of traveling players then kidnaps the Princess frog.  After several abominable productions around the kingdom, Imogene escapes, is reunited with her family, and eventually casts off the spell by kissing a frog.

The best part of the book in 1 sentence:   The best part of this book is the convincing characterization of Imogene, who is not too sweet, not too cynical as she tries cast off the spell without inflicting it upon someone else.

1 interesting note about the author:  The name Vivian Vande Velde is a mouthful!  You may hear her pronounce her name here at teachingbooks.net