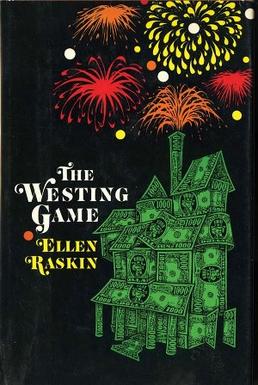 The Plot In Five Sentences Or Less: When the great paper magnate Samuel G. Westing dies under suspicious circumstances, 16 people are summoned to his mansion to hear his will read aloud.  In fact, they are all drawn into a game where they must pair up with another heir and decipher clues that are handed to them in order to determine the identity of the killer and inherit the Westing fortune.  Could it be Turtle Wexler, the wily 13 year old who can play the stock market like a champ?  Or perhaps it’s Sydelle Pulaski, who copies the will down in short hand — in Polish.  Suspicion abounds and the plot twists and turns as the 16 heirs narrow down who among them may have killed Samuel Westing.

My Take:  I’ve been wanting to read this book for a long time because it comes recommended whenever I search for mystery books for kids.  Unfortunately, I can’t say that I enjoyed it.  I found the characters, while quirky, to not be emotionally fleshed out.  I also felt that the emotional hook of the narrative — to find Sam Westing’s killer– to be lost in an ocean of detail.  To be fair, Raskin is juggling over 16 characters and trying to keep them all distinct in the reader’s mind–a high wire act for any writer to be sure.  But over half way through the book, I found that I had stopped caring who the killer was.

One Interesting Note About the Author: Ellen Raskin designed the dust jacket for the first edition of Madeline L’Engle’s A Wrinkle In Time.