The Plot In Five Sentences Or Less: Josh and his twin brother JB both love basketball and are powering their high school team to the county championships.  Their father, who was once a professional basketball player, has taught them everything they know about the game and couldn’t be prouder of their success.  Although there has always been a good natured rivalry between the twins, the tension increases when JB gets a girlfriend.  With his father’s health failing, Josh finds himself in a place that he’s never been before: alone.

My Take:  I can understand why this verse novel won the Newberry Award this year.  Kwame Alexander’s poetry captures well the emotional texture of Josh’s life, whether it’s the intensity of a basketball game or the simmering rivalry between twin brothers.  The author’s use of ellipsis, of what is unsaid but understood, propels the narrative forward.  Alexander never pesters the reader with details, but uses the verse form to put us in Josh’s shoes and allows us to feel what he feels.  The final pages gave me goosebumps.  Excellent read for ages 13+.

One Interesting Note About the Author:  According to his website, Kwame Alexander has “written 18 books, owned several publishing companies, written for the stage and television (TLC’s “Hip Hop Harry”), recorded a CD, performed at schools and conferences around the world, produced jazz and book festivals, hosted a weekly radio show, worked for the U.S. Government, and taught in a high school.”  Wow! 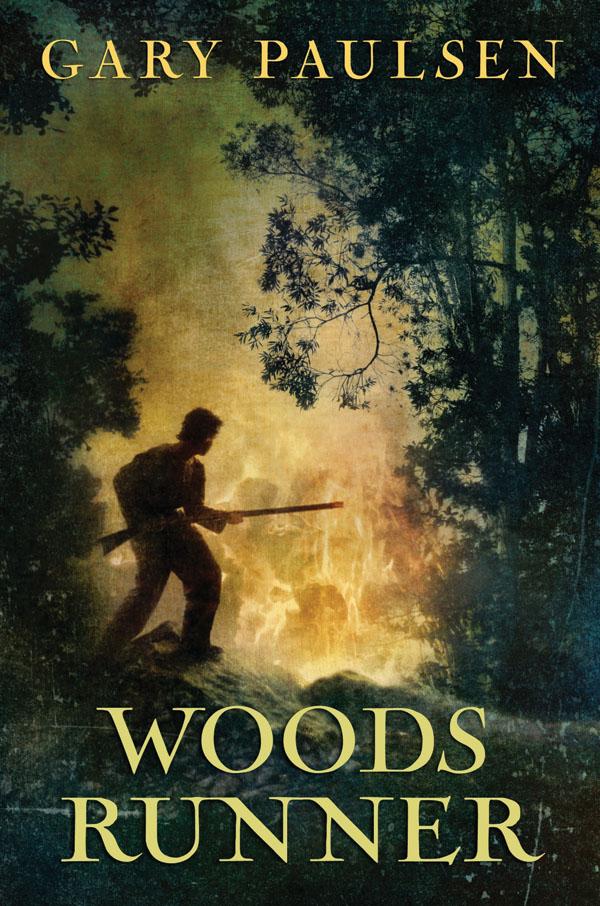 The Plot In Five Sentences Or Less:  Samuel is a young man living on the edge of the Pennsylvania frontier with his parents in 1776 at the beginning of the Revolutionary War.  Adept at hunting and comfortable in the woods, Samuel is out tracking game when he sees smoke rising on the horizon and realizes that Native Americans, allies with the British, have attacked his house.  Learning that the British have captured his parents, Samuel must make his way to New York City and attempt to free them.  Along the way he meets friends that will help him in his journey to restore some sense of peace to his life and the nation at large.

My Take:  This is a short and enjoyable book for teens looking for a slice of life during Revolutionary War times.  Between chapters there are short sections filled with facts and information on the era.  Paulsen also includes some graphic scenes of massacres, so this should probably be recommended for ages 13+.

One Interesting Note About the Author:  Gary Paulsen worked a series of odd jobs, including running dogs in the Alaskan Iditarod, before settling on writing.  Of the transition, he says on his website that “”I started to focus on writing the same energies and efforts that I was using with dogs. So we’re talking 18-, 19-, 20-hour days completely committed to work. Totally, viciously, obsessively committed to work, the way I’d run dogs….I still work that way, completely, all the time. I just work. I don’t drink, I don’t fool around, I’m just this way….The end result is there’s a lot of books out there.” He also says that his best advice to children is to “read like a wolf eats.”

The Plot In Five Sentences Or Less:  Theodora Tenpenny is a 13 year old who lives with her declining mother and her eccentric artist grandfather Jack in a townhouse that has seen better days.  When Jack suddenly passes away, his last words to Theodora are cryptic:  “It’s under the egg.  There’s…a letter.  And a treasure.”  Desperate to pull her mother and herself out of penury, Theodora’s investigations lead her to the discovery of a painting that appears to be straight out of the renaissance.  But is this truly a valuable piece that could bring in a windfall, or is it simply a fantastic forgery?  Theodora’s explorations will turn up fascinating stories of her grandfather’s days in World War II and show her the importance of art in the darkest of times.

My Take:  Readers who have an interest in art history and museums will most certainly enjoy this book.  As the dust jacket bills, those who enjoyed The Mixed Up Files of Mrs. Basil E. Frankweiler and Chasing Vermeer will appreciate this mystery as well.  I learned a great deal about Renaissance art as well as the pains taken to preserve it during World War II.

One Interesting Note About the Author:  According to her website, Laura Marx Fitzgerald’s favorite middle reader books are a tie between The Mixed Up Files and The Westing Game.