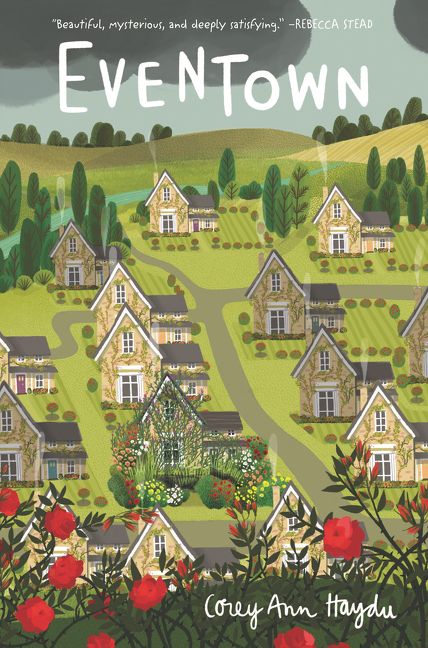 The Plot In 5 Sentences Or Less:  Twin sisters Elodee and Naomi are moving with their mom and dad to a new place called Eventown. While the girls are ambivalent about leaving their old house and changing schools, they soon find that Eventown is an amazing place.  The weather is always perfect, the residents are inevitably cheerful, and school has never been more enjoyable.  Eldoee, however, soon begins to sense that something is off, that no risks are ever taken, and nothing much seems to change.  As she becomes more acquainted with Eventown, she decides that the price people pay to live there is too high for her family.

My Take:  I felt that this book worked well on a metaphoric level, so long as the reader does not think too much into it.  Haydu introduces some elements of magical realism into the narrative at certain points and the reader will need to accept these to enjoy the book.  The author asks that we not examine too critically such plot devices as the the cause of the collective psychological fog which embraces Eventown.  When I accept that this is not a book based strictly in realism, I can appreciate that the story does a pretty decent job of exploring the themes of how families deal with change and grief, of how the drive for safety forces people to sublimate other emotional needs, and how deeper meaning derives from the messiness of life.  Astute readers will notice clear parallels to Lois Lowry’s The Giver.  While I’m not crazy about the plot mechanics behind the book, I would recommend Eventown to young people looking for a more serious read.

One Interesting Note About The Author: According to the bio on her website, Corey lives in Brooklyn with her family and “a wide variety of cheese.”

The Plot in Five Sentences or Less:  John and Abigail are the bright, twin children of professor and inventor John Templeton.  Following the death of their mother, the family moves to Tick Tock University where, during a lecture, their father is accosted by Dean D. Dean, a man claiming that John Templeton stole his idea for the Personal One-Man Helicopter (POMH).   Dean D. Dean, along with his brother, Dan D. Dean, kidnap the Templeton twins and demand that John to sign over the rights to the  POMH.  The twins must use their smarts to escape from the Dean brothers.

My Take:  This book is a clever and enjoyable read.  The narrator of the story is self aware and inserts amusing parenthetical remarks in the text as if he were arguing with the reader.  For instance, he states “We’re getting off point.  And I blame you.  Please, I urge you to stop interrupting.”  He also inserts “questions for review” at the end of each chapter that are meant to resemble reader’s comprehensive questions, but are simply ridiculous (i.e. “How would the Templeton twins’ lives have been different had they never been born?”).  Too much of this sort of thing would be gimmicky and annoying, but Weiner uses a judicious amount that keeps the reader laughing.  Credit should be given to Home’s schematic illustrations that reinforce the  rational yet ludicrous tone of the book.  Highly recommended for kids ages 8+.

One Interesting Note About the Author/Illustrator:  Ellis Weiner was an editor of National Lampoon and contributor to many magazines, including The New Yorker and Spy.   He has also written an e-book called “Atlas Slugged Again” which you can buy for $1.99.