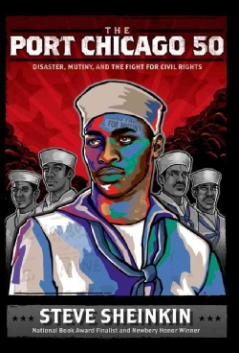 The Plot in Five Sentences Or Less:  In the 1940’s, America was at war, but its military was still segregated.  Against this backdrop, fresh recruits arrive at Port Chicago outside of San Francisco.  They are black men and, because of this, they are given the highly dangerous job of loading ammunition onto the ships with little to no safety training.  On the evening of July 17, 1944 a huge explosion rips through the port, killing over 300 people.  In the weeks following, 50 of the men refuse to load any more ammunition and are therefore put on trial for mutiny.

My Take:  The Port Chicago 50 is not Steve Sheinkin’s most exciting book, but it is his most poignant.  I found that the narrative slows down some during the trial portion of the story, but the final chapters more than make up for this.  By the end of the book, I found that I had a knot in my throat as I considered the sacrifice that these black sailors made, really until the ends of their lives.  The Port Chicago 50 is another example of Sheinkin’s gift of making history interesting and relevant.  Highly recommended for ages 12+ looking for a non-fiction read concerning civil rights.