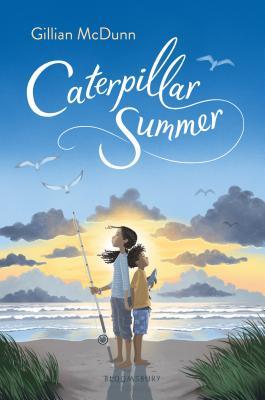 The Plot In Five Sentences Or Less:  Due to a last minute change of plans, Cat and her younger brother Chicken must spend 3 weeks of their summer vacation with grandparents whom they have never met.  They live on an island in North Carolina, which is at once an idyllic setting, but also presents challenges to Cat who must manage Chicken special needs, including his tendency to run off.  As Cat struggles with her brother’s behavior, she draws closer to her grandparents and to other children on the island.  Through these relationships, she discovers new things about herself, but also wounds that hopefully her time on the island can help heal.

My Take:  This is a strong first novel by Gillian McDunn and makes a respectable entry into the canon of realistic juvenile literature.  The central story of the book is Cat’s growth and change over the summer and her struggle to understand the things that have pulled her family apart in the past.  McDunn makes a strong argument that the youngest  members are sometimes the best ones to offer an opportunity for a family’s fresh start.  The author is adept at exploring several heavy themes — such as the inherent loneliness in care taking, the way that bullies themselves are victimized, the need to control, etc. — without making this into an ‘issues book.’  I would happily recommend this to any reader around 11 years who is ready to consider some heavy themes.

One Interesting Note About The Author:  The book Caterpillar Summer is in part inspired by McDunn’s relationship with her brother who multiple disabilities.

The Story (in 5 sentences or less):  Jessie Pearl is a 14 year old girl living in rural North Carolina in the early 1920’s.  Her mother died a few years before and Jessie, bright and academically minded, promised to her mother that she would go to “teacher’s school” and make something of her life.  Her plans are complicated however, when her older sister Carrie, having recently given birth to a son, dies of tuberculosis and Jessie is now in charge of the child.  This, coupled with her feelings for local farm boy J.T., are strong reasons that pull on her to stay put.  Will Jessie Pearl settle down early and become a mom and farmer’s wife, or will she head to the teacher’s school in the mountains of Watauga County?

My Take:  I thought that this book was well written.  Hitchcock set out to write a story that brought to life her family’s trials in North Carolina on the eve of the Great Depression.  My own family haunted the mountains of the North Carolina-Tennessee border during this time, so that may have been one reason why I appreciated this book.  My one criticism is that I found myself wondering if the pace, while fine for an old man like me, was too slow for younger readers.  This may be a book that older readers, say 15 and above, can appreciate.   The theme and plot of this novel great reminded me of Katherine Paterson’s “Lyddie.”

One Interesting Note About the Author:  According to her website, the death of her sister in a car accident in 1999 provided the motivation for her to begin writing novels.  She decided that “life was too short for unfulfilled dreams.”

Plot:  11 year old Moses LoBeau lives in the small town of Tupelo Landing, North Carolina.  She has lived there most of her life since she floated in (literally) during a hurricane when she was an infant.

For this reason, Mo has never known her real parents, but she is content to help run the local diner with her adopted parents Miss Lana and the Colonel.   When not serving up a heap of sass and fried food at the cafe, her favorite pastime is going fishing with her best friend Dale.

The small town life of Tupelo Landing is disrupted when the local grouch Jessee Tatum turns up dead in the creek.  Detective Starr and his sidekick deputy Marla arrive in town from Winston Salem determined to find and stop the killer.

Mo and Dale decide to aid in the investigation by forming their own group, the Desperado Detectives.  They soon have their work cut out for them when both the Colonel and Miss Lana go missing.

Personal Reaction:  I immediately had some reservations with Three Times Lucky from the very first chapter.  This was due to its treading upon territory overly familiar to anyone who reads children’s literature.  Turnage chose to write the novel in the first person and in a faux southern, rural style that seems so prevalent in juvenile and YA fiction but tends to wear on me quickly.  I’ve never met a child that speaks in the sassy similes of Mo Lobeau, but between Walk Two Moons and A Year Down Yonder, it makes me think that the Newberry Medal committees have a soft spot for this type of overwrought, country speak.

Also, another well-mined theme of kid lit appears early on when we discover that the protagonist is an orphan and looking for her biological mother.  If I had a dime…

My enjoyment of the book did not increase as I read further due to the elasticity of the plot.  When Mr. Jesse turns up dead, it is assumed that the killer must still be in Tupelo Landing, although no reason is given for this assumption.   Furthermore, when the identity of the perpetrator is finally revealed (with 100 pages of the book to go!), I could not help but feel that this character was awkwardly inserted into the plot.   Also, one of Mo’s pastimes is chucking note-filled bottles into the river hoping that her birth mother will find them.   Every time that she does this, I can’t help but think that a child as bright as Mo would sooner be down at the local public library on the computer searching for her mother on the Internet.

Still, Turnage does have an ability to turn a phrase.  Dale fixes his eyes so hard on a car “like he could stare the shine right off of it.”  Another character’s voice seems “shaved from ice.”  I suspect this vivid phrasing helped this novel a great deal towards becoming a Newberry Honor book