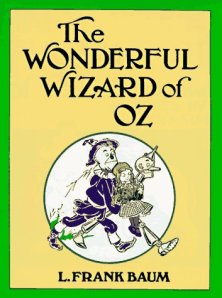 Any children’s librarian worth her salt (or his salt, in my case) needs to be familiar with L. Frank Baum’s classic The Wizard of Oz.  For my part, I have decided recently to read at least the first 3 or 4 books in the series.  I wanted to move beyond the initial book that Hollywood has so well acquainted us with and truly experience the strangeness of Baum’s imaginary world.  With this in my mind, I put the Wizard of Oz in my suitcase as I packed for my vacation last week.

We are all by now familiar with the story: a cyclone sweeps up the Kansas prairie girl Dorothy, her dog Toto and their house and deposits them in the magical world of Oz.  Upon landing in the country of the Munchkins, Dorothy learns that she must travel to the City of Emeralds and seek the help of the great Oz.  She meets some companions along the way in the form of a scarecrow, a tin man, and a lion. That is all that I will say about the plot, because you know it anyway.

My own reaction to Baum’s classic is that it holds up pretty well since its publication in 1900.  I sometimes felt that events were a little forced (“and then this happened…and then this happened…”), especially near the end when the party travels through a land of living ceramic people.  I couldn’t help but wonder why Baum inserted that in there unless he was trying to set up plot points for future books.

Ultimately I liked the message of uplift that pervades the story.  As Edward Wagenknecht writes in the Afterword, “all these people, and the cowardly lion too, when they wanted something, they went out after it and in the end they found it.”  And it’s true.  Each of the characters attains that for which they search.  The irony of course, often lost on children but clear to adults, is that each of the characters already had what they wanted.  The Scarecrow had brains, the Lion courage, the Tin Man had heart, and Dorothy had an adventure to deliver her from the tedium of the Kansas prairie.  What is Baum telling us?  That adventure is here and now?  That we already have what we so want?  I’m not certain, but I love when a children’s book pushes me into deeper waters like this.

So, even an adult reader in 2012 can enjoy The Wizard of Oz.  I look forward to tackling at least the next two in the series.